We rise by lifting others
Welcome to Shantiwan

Beed, one of the most drought prone districts in Maharashtra. Due to excessive drought, farming cannot be done and poverty was at its peak. Farmers worked in sugarcane fields to earn their living. Therefore it had become a prime income source for them. So it was obligatory for the workers working on daily wages to travel all over Maharashtra. As a result the workers had no option but to live an illusionary life with no education, no job and no agriculture. Due to which they had to serve as workers for generations after generations.
Each and every family was going through this situation but a person named Mr. Deepak Nagargoje was one of them who was aware of this situation from his childhood and thought of bringing a change. He thought that at least the future generations should get the privilege to educate themselves and live a blooming happy life. He was determined and started to work and this is how the place “Shantivan” came into existence.
Mr. Deepak Nagargoje resided in Chumbali village of Beed district. In 1995, while studying in standard XI, he participated in the ’Shramsanskar Shibir’ of Shri. Baba Amte organized on Somnath project. This camp had a great impact on him and gave strength to his determined pathway and he decided to devote his entire life in social work rather than doing an ordinary job.
After completing his education (D.Ed.) he gave up his education and got engaged himself in social work. In the year 2000 he got married to Ms. Kaveri who coincidentally had a passion for social work. Her family had an army background so patriotism and social work was imbibed in her from birth. She was also aware of the plight of the sugarcane workers and the sufferings of their children since childhood. Mr. Deepak convinced Mrs. Kaveri about the idea of ‘Shantivan’. She also decided to support her husband and whole heartedly followed him to fulfill the dream of ‘Shantivan’ come true. As a result Mr.Deepak’s strength had doubled and inspiration too. 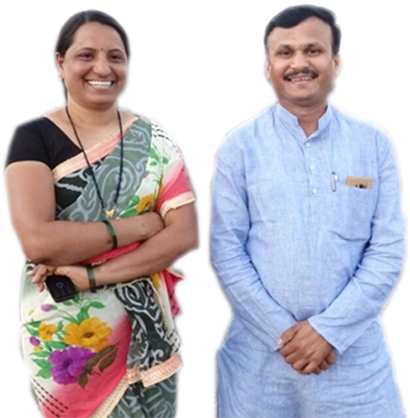 When we say – Where there is a will, there is a way – this thought comes true when we meet Mr Deepak Nagargoje and his wife Mrs Kaveri Nagargoje in a small village named Arvi. Their grit and resolve. Shantiwan embarked its journey on 27 November 2000. Receiving the inspiration and blessings from Shri Baba Amte Shantiwan was born from the urge to relieve the poor sugarcane sharecroppers and their families. Shantiwan team travels from place to place and meet people and come across to their life miseries they are undergoing.
Through their enormous passion, sacrifice and dedication through which Shantiwan has opened a school for deprived children, a shelter for abandoned women and their children, orphanage and an adoption centre.
Shantiwan believes in transformation. “Divert the youth towards agriculture and not towards politics.” Instead of thinking of scarcity and poverty and wander here and there, now the youth is working hand in hand to eradicate the crises.
This thought to come true took a lot of effort and will need more when we all would join and work for the urge and support and aid the movement.